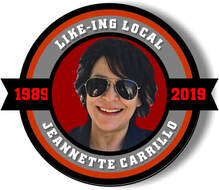 BEHIND THE SCENES AT LAS VEGAS LITTLE THEATRE

A few weekends ago a friend of mine surprised me with a birthday present of live theater. Did you know we had live theater in Las Vegas off the Strip?
I think I did, but it has been so long since I have been to the Las Vegas Little Theatre, 3920 Schiff Drive, nestled behind a row of retail buildings in Chinatown that I literally forgot the place existed.
Anyway, when Tom presented me with a flier to the theater’s 10th Annual Fringe Festival and asked me to pick out a show, I was excited. The performance, complete with a dim sum dinner we had planned for after the show, was going to be a real treat.
Pulling into the parking lot, I was amazed at how packed the place was. Wow! I thought, live theater really has a place among locals. And, the more excited I got.
Once inside the theater, we had to wait until the doors to the Mainstage opened, which gave me time to explore the place. Aside from the box office, and Mainstage Theater, the LVLT complex is made up of a small snack bar that shares space with a library and lounge and another theater, the Black Box, which was fully engaged in a performance. Our foursome waited about 20 minutes in the lobby before the Black Box let out and its audience filled every nook and cranny. Apparently, some showgoers from the Black Box stayed around for the second show, which we were about to attend because, after all, this was a festival and many patrons had purchased a special series pass.
Helpful hint: Seating is general admission, so if you like sitting up front you will need to arrive early and get in line.
According to the Fringe Festival flier, there were nine plays to choose from, so before Tom bought the tickets, I asked everyone to pick a show they would like to see, with the ultimate decision being mine. Sure enough, all four of us picked the same show. Great minds really do think alike.
And what play did we pick? Well “The House of Yes” by Wendy MacLeod, of course. The description featured the following: “A tale of love, obsession, incest, murder and complicity.”
Take that for a lighthearted Saturday afternoon!
As we made our way into the theater, a sparse space of elevated seating facing a minimalistic stage with, seriously, four props filled out the room. After we staked out our seats, the show started on time and the actors brought the action to life.
While I think comparing the festival to Cannes may be a bit of a stretch, the show was really fun, and it was great to get re-reacquainted with the theater. Everyone in our party had a great time, and we are planning on heading back.
Just in time for the Mainstage’s next show, “Godspell,” which runs July 12-28.
Heading back this time will be super special because Sun City’s own Fitness Program Coordinator Jessie Miles will be tapping into her passion as the show’s choreographer. In addition, Jessie’s twin sister, Hallie Lyons, is the show’s director.
While you may be familiar with the story behind “Godspell,” a musical twist on Jesus’ life and teachings leading up to the Crucifixion, Jessie admits this performance promises some unique takes and added originality to the script.
Whether you know Jessie because you take fitness classes with her, or you engage her while attending one of the health seminars at Desert Vista, seeing her work in “Godspell” will offer a refreshing way to get to know her a little better. I always think it’s fun when given the opportunity to learn something new about someone you see almost every day.
Plus, it’s just plain cool to have a connection with an insider!
“Godspell” plays on Thursday, Friday and Saturday at 8 p.m., with 2 p.m. matinees on the second Saturday and Sunday of the month. Tickets are $26. For more information, call 702-362-7996, or visit LVLT.org. Don’t forget to like the Las Vegas Little Theatre on Facebook at https://www.facebook.com/LVLittleTheatre/

Wild Horses of Cold Creek Turn a Hot Day Into a Cool Adventure
A few weekends ago I was feeling the need for some serious scenic therapy so a girlfriend and I threw a few bottles of water into an ice chest and headed north on Interstate 95. I don’t know about you but when my mind gets to feeling a bit overwhelmed there’s nothing like a big dose of Mother Nature to help me clear my head.
Now, my friend had no idea where we were going when I chucked off the hard top to my Jeep Wrangler, but she’s got a great sense of adventure and, like me, I knew she needed an infusion of fresh air and wide-open spaces.
Starting off at 9 a.m., the only answer I required was, “Nope,” when I asked her if she cared where we were going.
Perfect.
About an hour or less from Sun City in just about any direction you can find some funky little spots that fit the bill for escape. And on this particular morning I opted for a place where I knew we could find something special.
You see, my friend, also like me, loves horses. And if you are wowed by the beauty of the majestic equine, then there is nothing like seeing a wild Nevada mustang up close and personal in its natural surroundings. It had been a while since I had journeyed up to Cold Creek, and I knew Deb had never been there. I couldn’t wait to share the place with her because I was certain it would be a surprise.
The destination isn’t a park or an official visitor center. You don’t need binoculars or have to pay an entrance fee. Rather, once you take the Cold Creek Road turnoff (turn left) and start the climb up the one-lane road shared by the occasional tourist sedan and four-wheel drive pickups towing ATVs you’ll come across one of the state’s most prized possessions – prized, at least, to me.
Keep a watchful eye because once you see the road apples start to appear you know they’re close.
And just like that, he appeared, effortlessly, springing up from a gulley to crest right at windshield level no more than 20 feet from the Jeep. He was a good size, skinny and matte black with a wispy mane that caught the wind as he stuck his nose into the prickly top of a Joshua tree. As soon as we passed him, his harem of varied-colored mares came into view. Each lady too busy to look up from the lunch of gray bushes that licked their ankles. As I pointed them out to Deb, a glint across the road caught my eye and another mare, this one in foal, popped out from behind dried branches. In the second it took me to pull off the road and park, a puff of dust erupted above a gangly little dude who couldn’t wait to run up and snuggle into the safety of his mama’s tummy. Clearly, our outburst of excitement must have awakened the baby horse.
What a sight he was to behold.
As we lingered and took in the scenery, my Mother Nature meds started to kick in. It was just the therapy I had expected. A quick stop by the side of the road and a month’s worth of stress gone in a flash.

Copyright © 2022
Photo used under Creative Commons from Tambako the Jaguar