The Sun City Summerlin Security Patrol celebrated its hard-working volunteers on Saturday, October 13, at Desert Vista during its annual 200 Club Dinner. The event, which this year touted a Western theme, recognizes volunteers who have completed 200 hours of service during the year. For the 2017-18 year, 153 volunteers were eligible for the ceremony, said Patrol Chief Darlene Vaturi, adding that currently the Patrol’s membership is 219. In the last year, those volunteers have logged a total of 88,714 service hours to Sun City.
In addition to the presentation of certificates commemorating the 200-hour milestone, the event honored longtime volunteers Sylvia and Walter LaMay for their 22 years each of active service to the Patrol. Security Patrol volunteers and their guests, along with members of Sun City Summerlin’s Board of Directors and Executive Director Mitzi Mills attended the event that was catered by SCSCAI’s Food & Beverage Department.

Why I Joined Security Patrol
Getting to Know Residents, Streets, Community an Added Bonus 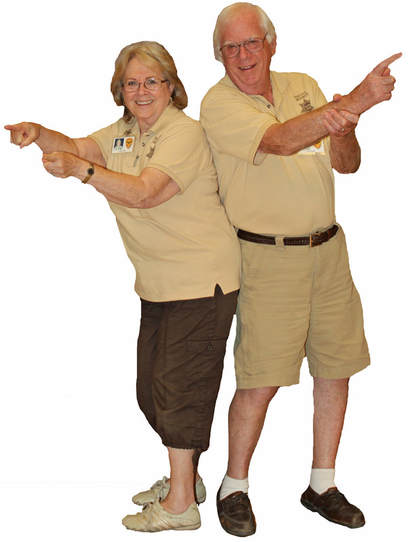 Hilda and Allyn Ayotte learned about Security Patrol when they attended Sun City's classic car show. Photo by DJ Minella/Link
BY HILDA AND ALLYN AYOTTE, Drivers
Before we moved to Sun City Summerlin, part of our research included the overall security of the community. We learned of Sun City Summerlin’s long-standing reputation for safety and security, which became a primary consideration for our move here. It wasn’t an overriding factor, but security was very important to us, especially considering that we weren’t getting any younger.
We had no knowledge of the Security Patrol until we had settled in and begun to get to know the neighborhood. A year into our move to Sun City, we were introduced to a Security Patrol recruiter at a car show held at the Mountain Shadows Community Center. We decided that as long as we lived here, we should join up and become a part of our own security equation. We signed on, went through a number of training sessions and now serve as a husband/wife driving team, patrolling regular, rotating shifts of all the neighborhoods. What a way to get to know and participate in the community!
Volunteering with the Sun City Security Patrol has been a rewarding experience, far beyond the satisfaction of knowing that we were contributing to our own well-being. Getting to know new people, attending Security Patrol events and getting to understand the 73 miles of roads in Sun City, are welcome side benefits.
However, in all of this, we have come to understand that our training has made us much more aware of our surroundings, particularly in our own neighborhood. We have used our knowledge and training to prompt us to ring neighbors’ door bells when we haven’t seen any activity for a few days and, on numerous occasions, to contact neighbors when we saw garage doors open into the night. In the overall scheme of things, these are not earth-shattering events, but they do give us a sense of satisfaction and well-being, knowing that there are about 225 like-minded Security Patrol volunteers watching out for us 24/7, as well.

Photo by DJ Minella/Link
BY ERIK E. BRAUN, Driver
I am coming up on my first full year of residence and well into the second year of my working in Security Patrol as a driver (Tuesday, Thursday and Saturday, 00:00-4:00 shifts).
I am currently a driver and have volunteered to be part of recruiting and to become the Neighborhood Watch liaison here in Sun City Summerlin.
I am proud to have served in and finished a career with the U.S. Army as a combat medic (paramedic). Looking back, I can still remember leaving for basic that fateful day in June 1988.
…You can discharge the boy from the military but you can’t discharge the military from the boy. It is very tough to break that kind of bonding and I, for one, have always looked forward to being part of it; Military, Legion, V.F.W.
What do you find most enjoyable about the Patrol?
Absolutely without a doubt, the newfound friendships and helping my fellow neighbors.
After returning from my tour of Iraq, yes, “of,” since I drove as part of a convoy escort I can tell you I believe every single inch of Iraqi roads were driven by myself over the 2005 and 2006 time frame. Anyway, after returning I rejoined the activities of my American Legion and served as commander for a year. I was then asked to be the chaplain, became ordained and served another eight years as part of the executive board. There have been many good memories; dedications, Veteran’s Day presentations, parades, in addition to those sad ones, I have been in charge of funerals, for our departed brothers and sisters and our yearly 12 cemetery Memorial Day services. However, as it’s said, I wouldn’t trade it for …
Personal Experience as a Patrol Volunteer
At the large garage sale at Mountain Shadows, a seller was overcome with the heat and my medical training was called upon to be a first-responder and call for the ambulance to provide further care and transport to the local hospital.
I’ve helped out fellow co-workers day in and day out by always being at the ready during any of my shifts.
Photo by DJ Minella/Link 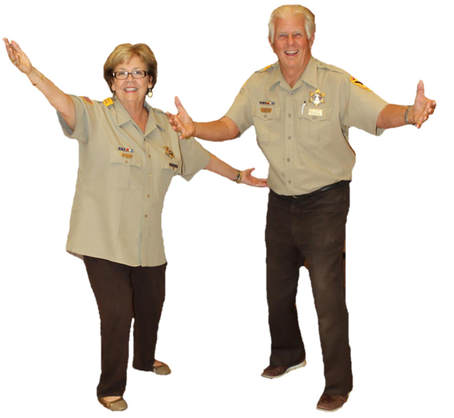 John Lytle and his wife, Cathy, are proud members of Sun City's volunteer security patrol. Photo by DJ Minella/Link.
By JOHN AND CATHY LYTLE, Drivers
One evening my wife and I were patrolling together when we received a call from our dispatcher who had received a call from a resident who suspected someone was in her yard and possibly trying to break into her house. It was about 10 p.m. and we immediately went to the residence, which backed up to Rampart Boulevard. We did not see any activity. At the door, I asked the resident if I might go into her backyard to make sure all was clear and, of course, she said “Yes, please do!” I immediately saw/heard the problem as it was the 4th of July and fireworks were being set off across the street in another subdivision. The sound, being strange, had scared the resident as she lived alone. Once she came to the patio and saw for herself she was embarrassed. I gently assured her that the property was safe and to feel free to contact us if she ever felt uneasy again.
Many who live in our community are getting along in age, are living alone and have these types of experiences.  This is a lot of what we do at Security Patrol – We are not policemen, but “Neighbors helping Neighbors!”
It was very gratifying to see the caller’s relief and know we had made a difference.

Security Patrol is always looking for volunteers. If you would like to join a group of residents who work toward making Sun City safer, contact headquarters at 702-254-2303.