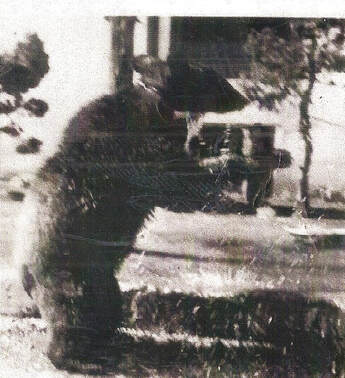 ​In 1952, I was assigned to the 187th Regimental Combat Team, a part of the 11th Airborne Division stationed in Korea. The 187th was the only paratroop unit to make a combat jump during the Korean War. I wasn’t part of the jump, but Rocky the bear was!
Rocky joined the unit when 1st Sgt. Kendall somehow obtained her from the Hokkaido, Japan, zoo back around 1950. She was just a cub at the time, soon after the unit was ordered to make that combat jump. Having nothing else to do with Rocky, Kendall put her in his kit bag and together they made the jump. At that point, Rocky was promoted from mascot to Private E-1, a full member of the team. Later, she was fitted with her own parachute and eventually made three, non-combat jumps.
Rocky’s career was somewhat checkered. For example, as she grew older Rocky developed a taste for sugar and was known to frequent the mess tent to forage for it. One day, while on such a mission, the mess tent was hit by a mortor shell. Two men were killed and Rocky was injured. At the next morning formation, Rocky was presented with the Purple Heart and promoted to PFC.
But when it came down to it, PFC Rocky was still a bear and bears can get into trouble, especially when given a little help from the boys in the outfit. For example, some time after being injured in the mess tent explosion, some of the boys fed Rocky some booze. Somewhat drunk, Rocky wandered into the 1st Sergeant’s tent and was a bit unruly. Sarge was not amused. At the next morning’s formation, Rocky was demoted back to Private.
Then there were the pranks. One morning, when one of the barracks orderlies had his place all cleaned up and ready for inspection, some of the guys slipped Rocky into the latrine. To Rocky, rolls of toilet paper were toys to be played with — and play with them she did, unrolling many rolls and playing with them on the floor. Needless to say, the barracks didn’t pass inspection.
Then there was the time when a high ranking officer came down from Division and was greeted by Rocky in our HQ tent. Rocky wasn’t happy to see a stranger and chased him around the tent until the guys got control of her. You can bet the Sergeant got an earful!
One time, while I was responsible for watching her, she got loose and was running in the tall grass at the edge of the camp. I grabbed one of the Korean houseboys we called Peanuts and we took off after her. I was wading through the tall grass when, out of the corner of my eye, I saw a brown streak followed by a black one. Then I heard a loud growl mixed with a plea for help. I ran to the scene, found Rocky on top of Peanuts and separated the two. All Peanuts could say was “She tried to eat me!” He took off and I never did see him again.
I said that Rocky had made three non-combat jumps. That’s not to say that she wasn’t performing a useful task. Generally, before we jumped we threw out what we called a wind dummy to let us judge the effect of the wind currents on the jump so we could better hit our target landing zone. On those three jumps, Rocky was our wind dummy.
When the outfit rotated back to the States, Rocky went with them. She was donated to the St. Louis Zoo, where she stayed until her death in 1967.

THE GRENADE ON DECK 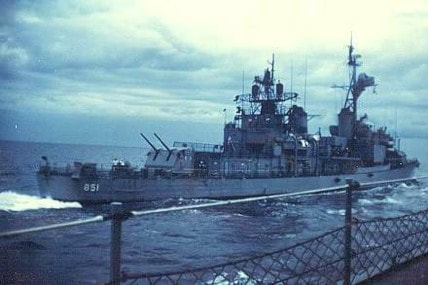 (A Kodiak Tale on Kodiak Waters)
By Dean Otteson

Back in the year of '42
Tony, the sailor, was cruising the ocean blue
Aboard the U.S.S. Dent,
The mighty destroyer went.

Into a sea of fog, snow and cold,
Tony stood his endless watch as told.
He was the engineer and kept the engines running hot,
And he loved the warmth of the steam boiler pot.

When Kodiak Island did appear,
Hopes of a landing was near,
But the waves were high and at 20 below;
The ship iced up and began to slow.

The relentless sea washed across the bow
As the Captain said, “Sailor get my scow,"
A landing we will make,
In a sea as high as the ship will take.

“As Captain of this ship, I must demand,
I will conquer this wretched land.”
Now Tony, as engineer, had to run the gig,
So up on deck he shook a leg.

The waters of Kodiak can take a man,
Like no other waters can.
Life is short for the bold and brave,
And Kodiak waters have put many in their watery grave.

The frigid sea has no remorse for who they take,
And Neptune is always on the wait.
The gig was lowered over the side,
So the Captain could take his ride.

And into the night they fled,
With waves going above their heads.
The coxswain steered the little craft,
While the Captain stood at the aft,

Tony kept the engine running fast,
So the Captain could attend the Captain’s Mass.
Business done, the weather was worse,
And the little craft was about to burst.

Upon the return to the U.S.S. Dent,
Down the ladders went,
The Captain and coxswain did ascend,
While Tony took care of closing a vent.

The gig was bouncing back and forth,
And Tony missed a step,
He feel into the sea, as all above could see,
As the king crab waited for thee.

Tony’s heavy clothes began to make him sink,
And life becomes short for a man in the drink,
His life flashed before his eye, as his clothes pulled him down,
Tony knew he was about to drown.

Then like a snake above, a line entered the sea,
From the man above it was sent to thee,
Who know what a line can do,
To save the life of a Navy crew?

Tony grabbed the line as he began to sink,
His hands clutched with all his strength,
And his mates pulled him to the top,
He thanked God a hell of a lot.

The Captain said, “Sit him on his steam boiler turbine,
And don’t anyone disturb him.”
He was frozen to the bone,
And now he felt he was home.

As the temperature began to rise on his seat,
He could feel the fire’s heat.
Soon his two cheeks turned lobster red, as he said, “No lie,
I thought I was going to die.”

(This poem is based on a true story as told to me by 96-year-old Sun City resident Tony Giuffrida, who spent three years in the Pacific during World War II aboard the U.S.S. Dent DD-116.
​Thanks for your service Tony!)

SURE, CHIEF, THE GUN IS UNLOADED

By BRUCE ADAMS
​
USS RUPERTUS (DD-851). Rupertus was “forward deployed” to Yokosuka, Japan. This was an American Naval base (former Japanese Naval base) near Tokyo. There had been a U.S. Navy destroyer squadron stationed there for many years. The senior sailors on these ships were not unlike those in the book/movie “Sand Pebbles:” While the ships rotated back to the U.S. every two years, many of the senior sailors stayed in Japan, and were re-assigned to the newly arrived ships. Thus we had a very professional and experienced crew, of old fashioned “West Pac” (Western Pacific) sailors. (My chief petty officer, for example, had not been back to the United States in over 12 years.) This also made up for the fact that much of our crew was very young and inexperienced. The Vietnam War was still on and the Navy sailors were primarily volunteers, many of whom joined the sea service to keep from being drafted into the Army and sent to Vietnam. So we had “old” senior West Pac sailors, and a bunch of young kids.
The Vietnam War was still going strong, and these forward deployed destroyers were the closest ships to the war. My ship (USS RUPERTUS) was a WW II destroyer that served in the Vietnam Combat Zone perpetually. We spent lots of time at sea, and conducted destroyer operations every day!
I had the best job on the ship: Gunnery officer. RUPERTUS spent many months on the gun line in Vietnam, firing about 10,000 rounds during my tour as gunnery officer. How good was that!  The smell of gunpowder in the morning! I had a great division of very hard working, young sailors: two rated gunner’s mates (GMs) and a collection of hard-working, energetic, motivated young strikers, working to make rate.
Every day at sea generated a sea story. One involved a .50-caliber machine gun. RUPERTUS had just left the combat zone, heading to Hong Kong for a respite from the rigors of combat. My chief gunner’s mate informed me that the machine guns had been stowed for sea. The guns were mounted on the ship’s superstructure when in the combat zone. OK, that is good…stowed in the armory.  The armory was located on the main deck, aft. Safe storage, indeed! (What could go wrong?)
A few hours later, Chief Jordan walked into the armory. He looked at the two machine guns mounted in brackets high on the bulkhead and said to a young sailor: “Are you sure that gun is unloaded?”
“Sure, Chief, it’s unloaded,” said Seaman Apprentice Flores. He then reached up and squeezed the trigger.
The sound of the blast was heard throughout the ship. The .50-caliber bullet weighed 114.17 grams and traveled at an initial velocity of about 2,810 feet per second as it headed relentlessly toward the forward part of the ship. The 5.45-inch long projectile traveled parallel to the ship’s center line and was about 7 feet above the deck. But our armory was way aft. The deck of the destroyer rose gently as it approached the bow. The bullet traveled parallel to the sea, but the deck rose continuously toward the bow. The bullet passed through aluminum bulkheads, office spaces, storerooms and workshops along the main deck. As it neared the middle of the ship, it was now about five feet above the deck.
The disbursing officer was in his office on the starboard side of the ship. His name was Karl Mess, and he was preparing for payday. Karl was shuffling through pay records at his file cabinet drawer when the projectile entered his office. It lost initial velocity, having gone through a dozen or more metal bulkheads, but it was still deadly. It tore into his bank of jammed file cabinets, shredding pay records and causing destruction. Karl stood at an opened file drawer and the bullet exploded those records about 18 inches in front of his nose.
I was just leaving the wardroom when I heard the explosion. Not loud, but clearly the sound of a gunshot. I walked into the passageway and headed aft, toward the sound of gunfire. I was unsure of the details of the incident, but I knew my guys were involved. I was surprised by the disbursing officer, face scarlet with rage. He confronted me in the passageway, grabbed my shirt collar, shook me violently, screaming “Your guys are trying to kill me.”
He eventually calmed down, and although my guys definitely tried “to kill him,” they were, happily, unsuccessful. Payday was held, as usual. The weapons officer (my boss) admonished us to be more careful with “unloaded” weapons. And my second-class gunner’s mate would not let the chief back in the armory.
(“It’s all his fault!” he said.) There was no punishment for 17-year-old seaman apprentice Flores, who had just finished two months on the gun line, humping 5-inch projectiles for 20 hours a day.  The worst punishment was to let him resume his duties as a gunner’s mate striker.
There is nothing more exciting than a bunch of young sailors in a war zone with all kinds of loaded weapons! Like famous comedienne Gilda Radner said, “It’s always something!”  ​​ 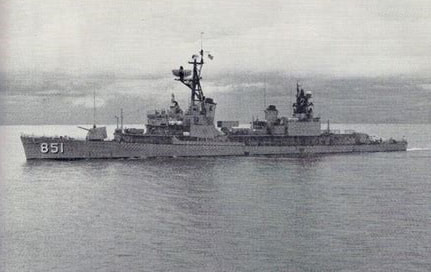