NOMINATIONS OPEN FOR 2020 BOARD ELECTIONS

Deadline Day Filings Must be Date/Time Stamped
If you are thinking about running for Sun City’s Board of Directors, the deadline to file your candidate’s statement is 5 p.m., Friday, November 29. All candidate statements must be received by the Administration Office at Mountain Shadows by the deadline.
Due to the fact that November 29 is an SCSCAI holiday, the Administration Office will be closed. All candidates filing on November 29 only must be sure to have their paperwork date and time stamped by the Mountain Shadows Social Monitor. Applications submitted on November 29 that are not date/time stamped will NOT be accepted.

Residents, Staff Get In on the Fun 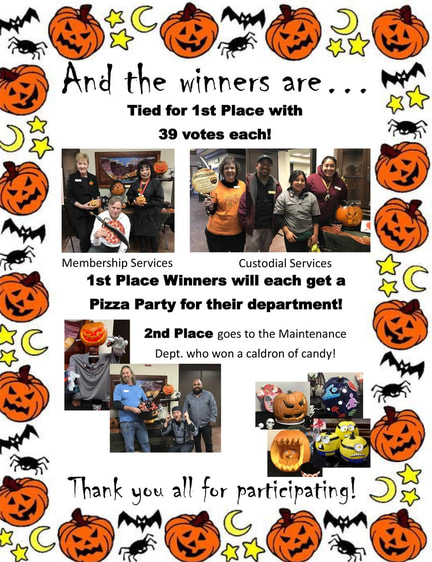 Residents and SCSCAI staff members got into the spirit of the spooky holiday on October 31 as Mountain Shadows hosted an employee pumpkin-decorating contest and Desert Vista welcomed partygoers to a Halloween dance.
Hearty congratulations go out to Sun City’s custodians and Membership Services staff members who tied for first place with their dry-ice-breathing pumpkin and creepy Jack-o-lantern complete with a skeleton’s body.
Rounding out second place was Building Maintenance, followed by Link. Residents visiting Mountain Shadows on Halloween from 10 a.m. to 2 p.m. made up the judges, casting vote tickets that totaled 39 votes for 1st place, 21 votes for 2nd, and 19 votes for 3rd. In all, 140 votes were cast. First-place winners received a pizza party for their department, while 2nd place took home a cauldron filled with snacks and a colossal rat!
Departments rounding out the competition were Accounting, Community Services and Health & Fitness.
Photos by Jeannette Carrillo, Stacie Coppens, Richard Becker/Link

While most Americans understand that Veterans Day, which always falls on November 11, is a day to honor our military veterans, few know the historical significance of the day. Veterans Day originated as Armistice Day and marked the end of the hostilities of World War I that occurred at the 11th hour on the 11th day of the 11th month. Therefore, the day is always recognized on November 11, regardless of the day of the week the 11th falls on.
In 1954, President Dwight D. Eisenhower officially changed the name of the holiday from Armistice Day to Veterans Day as a formal day of remembrance to include all Veterans of all American wars. Great Britain, France, Australia and Canada also commemorate WWI and WWII veterans on November 11. In Europe and Great Britain, it is common to observe 2 minutes of silence at 11 a.m. every November 11.
​
“Only the dead have seen the end of war.” – Plato.
Veterans Day honors those who have served in the past or currently are serving in the military.
The military veteran population of the United States is:

SPELLING OF VETERANS DAY
While the holiday is commonly printed as Veteran's Day or Veterans’ Day in calendars and advertisements, the United States Department of Veterans Affairs explains that the attributive (no apostrophe) rather than the possessive is the official spelling “because it is not a day that 'belongs' to veterans. Rather, it is a day for honoring all military veterans.”
Americans are encouraged to say thank you to those who fulfill this patriotic duty to maintain the freedoms of our nation.
Ellen Greenspan/Link

Las Vegas Mayor Carolyn Goodman addressed members of the Men’s Club at their monthly meeting on October 29 at Desert Vista. Mayor Goodman started her talk sharing entertaining stories about her life before taking the oath of office as a mother, a wife, the wife of former Las Vegas Mayor Oscar Goodman and the two-year anniversary of Oct. 1 events that have left a lasting effect on the city. For those who have not yet made a trip to Las Vegas’ Healing Garden in downtown, the Mayor urged them to do so.
“It is a magnificent place that to this day is a place of serenity,” she said. The mayor’s talk continued for about 35 minutes before it gave way to a Q&A that included questions about Immigration and Customs Enforcement (ICE), her cancer diagnosis and treatment, technology and the future of Las Vegas.
“Las Vegas is made up of 155 square miles and it’s divided into six Wards – Ward 4 is yours here in Sun City – and no two are alike,” the Mayor said, explaining the successes and challenges of each quadrant.
The mayor wrapped up her talk with a gift to those in attendance of her commemorative casino chip.
Jeannette Carrillo/Link

READ WHAT OUR COLUMNISTS ARE SAYING